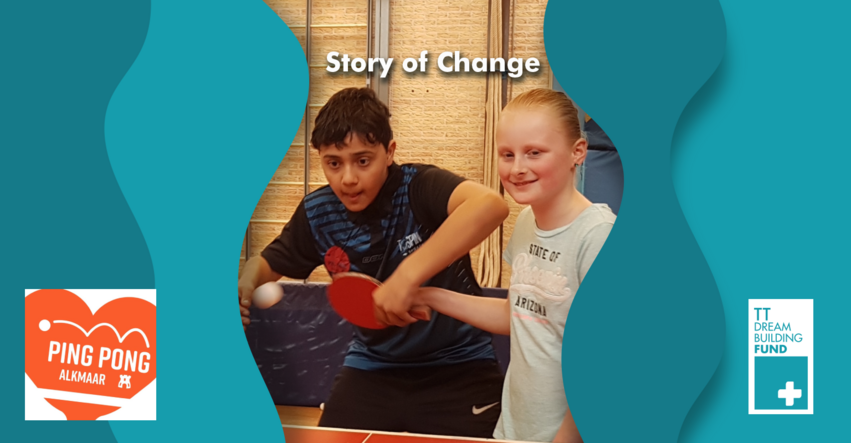 More than four years ago, 11-year-old Yousef was forced to flee Syria with his family. Their journey brought them to Alkmaar in the Netherlands. In the short time he has been here, Yousef has grown into as a positive role model for integration in the community. He plays and coaches table tennis at Ping Pong Alkmaar, speaks Dutch fluently and is always keen to lend a helping hand.

Every year millions of individuals are forcibly displaced worldwide because of persecution, conflict, violence, or human rights violations. Over half of the world’s refugees are children.

Yousef was one of them. For many refugees it is not that easy to integrate into a new place where they do not speak the language or know the culture codes. Sports like table tennis can be used as a universal language in a fair environment fostering stability and friendship, and feeling welcomed, valued, and respected. This is the challenge Ping Pong Alkmaar (PPA) has taken on.

Adaptation is a change!

Selected as one of the Dream Building Fund 2019 projects PPA strives to become an inclusive club, offering access to all individuals regardless of their background and fight stereotypes of migrant and refugee populations by offering a safe space for interactions and the common language of table tennis.

Shortly after arriving in Alkmaar, in the summer of 2017 Yousef joined PPA, although he didn’t really know much about the sport. He began and continued playing because for him table tennis is fun moving a lot and being able to do it together with lots of other kids.

“When I was 9 years old, I played tennis. But we couldn’t play anymore because of the war… So, we had to stay home…” Yousef, Participant of Ping Pong Alkmaar

When Yousef came from Syria, he did not speak or even understand the language. Now, 15-year-old Yousef not only communicates with ease, he also helps with translations. The testimony from project leader Mark Smith who has seen his growth over the past years, speaks for itself. He is proud of Yousef, as student, volunteer coach. With sparkles in his eyes, Mark shares with us about his personal development, skills development as well as his positive and motivating influence on the other kids.

“He is brilliant with other kids as well. He comes a lot to the schools to help me with my clinics. They are all over the town. He is fantastic helping youngsters, beginners. He has got a lot of patience. And he is integrated very well in society here into local Alkmaar life. Lots of busy things going on in his life now.” Mark Smith, Project leader of Ping Pong Alkmaar

Looking to the future, Mark sees Yousef as a real strength and potential inspiration to his peers, regardless of their background.

Impact of Covid-19 on project activities

While the world is still holding their breath due to the Covid-19 pandemic, our DBF project PPA is hosting weekly online sessions with refugees in the Za'atari camp from the project Nittaku Dream Building with Refugees. During nearly 5 video conferences children and coaches at the Za'atari Camp in Jordan and PPA in the Netherlands met to learn from each other’s experiences and knowledge.

This online training also changed Yousef. Before, he seemed to struggle being regular and committed, but since the video training with refugees his project leader sees a positive difference in him as Yousef was and still is able to give back support to Syrians in the camp.

We, the ITTF Foundation, are happy to see examples such as Yousef. We know integrating is a real struggle and has ups and downs, but he is doing a great job, with a positive attitude and using table tennis. We wish to thank Mark and PPA team for their passionate work promoting the integration of different kinds of refugees into your community! It is an honourable and encouraging way to use table tennis as an enabler for social development.

For more data on the global refugee situation: https://www.unrefugees.org/refugee-facts/statistics/

Watch the complete interview here to find out more about Yousef’s life and get inspired!