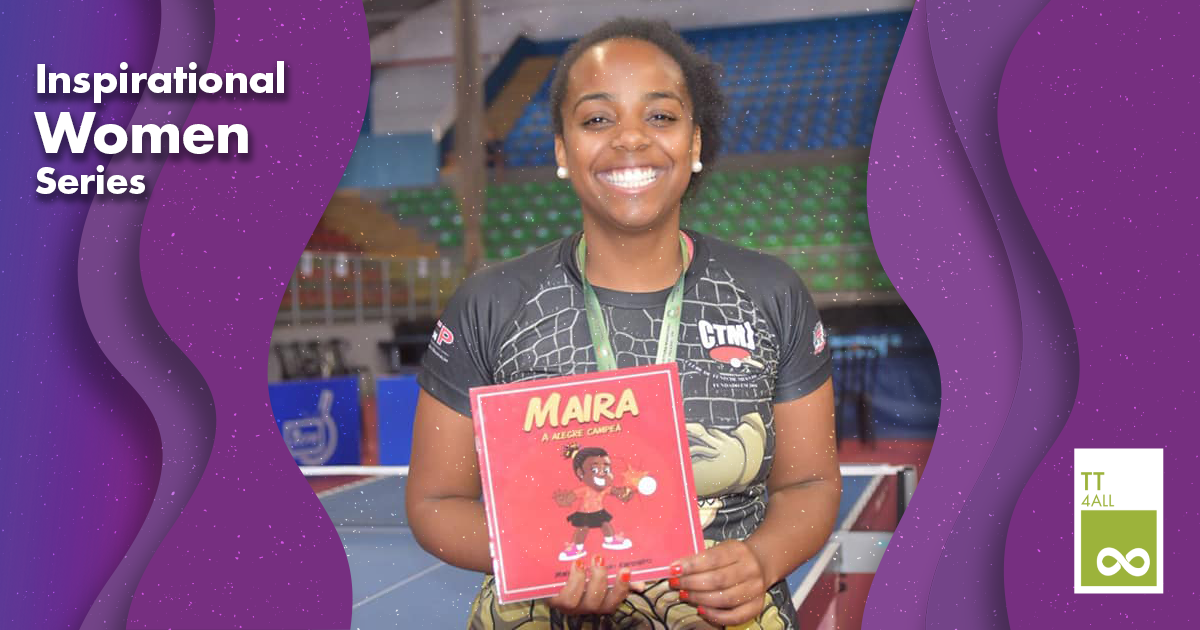 During the Week of Solidarity with the Peoples Struggling against Racism and Racial Discrimination, we feature a woman who is using her story in table tennis to inspire others: Maira Ranzeiro, the first ever black table tennis champion in Brazil.

Maira began her story in table tennis at the age of 11 when she visited a cultural and sport centre with her family every weekend in São Paulo. She said that her parents stayed in the reading room, her brother played volleyball, her sister played futsal, and she practiced table tennis.

One day she participated in a table tennis tournament in the centre and won first place. Afterwards, Maira was invited to train in Itaim Keiko, one of the most popular clubs in Brazil.

At the young age of 15, Maira became Brazilian champion for the very first time as well as becoming the first ever black table tennis player to win the national title. She would repeat that feat in 2017, when she was also chosen as the best athlete of the year and finished at the top of the national ranking.

During her eight years in the Brazilian team, she won two Latin American titles and competed in two World Junior Championships. Besides our beloved sport, Maira also dedicated her time to two other passions: reading and writing.

“I always loved reading and writing and I strongly believe in the power of transformation and inspiration of books and literature.”

Since she was a little girl, she dreamt of writing a book. Maira studied Literature at the University, but her dream did not materialise until her successful 2017. The former Brazilian player felt the urgency of writing 'Maira, a alegre campeã' (English: 'Maira, the happy champion') to show her story in sport as an inspiration for many other people.

As an adult, she realised how much she could contribute to children’s literature by capturing a real story of a female black champion in the form of a book. It is essential for Maira to tear down stereotypes towards women and girls as well as people of colour in a country where half of the population is black, protagonists are black, too.

Maira feels the presence of veiled racism, where the white population does not assume that something they say, do, see or choose not to see, is in fact racist.

“Therefore, when one is not aware, there is no change.”

As previously mentioned, the black population is almost the majority in Brazil, but they are also the most socially vulnerable. They are the most affected by unemployment, precarious access to health care, and poverty.

The former Brazilian player considers that racial equality is something where everyone – the black but also the white population – has to take part in equally:

“It is necessary for the white population to understand and mobilize for the racial cause, as the black population needs to be in more positions of power and protagonism.”

Experiencing discrimination and standing up for others

Unfortunately, Maira has suffered racism and also chauvinism in sport. She knows that this discrimination might not be something personal in all cases, but something as part of our society and system:

“Racism and chauvinism are structural and even if they do not explicitly affect me on a daily basis. [For] example I have a lot of competence and many results, however I do not get the same opportunities for visibility work among other things, so it affects my financial, loving, health life mental (...)”

However, table tennis also gave her satisfaction, to expand her horizon, and to develop skills:

“Table tennis changed my life, [it] allowed me to visit different countries and different cultures, I also developed many skills due to the sport such as focus, concentration, discipline, persistence and many others.”

Thanks to table tennis, she was able to fulfil her dream of writing her first children’s book to share empowerment and joy through our beloved sport. Still, Maira thinks the table tennis community can do more for gender and race equality like putting more women and more black women in positions of leadership to gain equal power – as table tennis can be inspiration, joy, and a meaningful tool for transformation.

“I believe that with more women, mainly black and indigenous, in charge, new projects would be created which would greatly benefit the table tennis and table tennis community.”

Her passion for Samba

Maira’s encouragement and passion to inspire and empower girls and women goes even beyond her table tennis story, she also uses her music as a tool. Samba is her other love – the famous Afro-Brazilian rhythm. From a very young age Maira had contact with instruments, such as guitar, tantan, ukulele, and pandeiro (tambourine).

During her years in table tennis, Maira did not pay much attention to music, but that changed when she left the Brazilian team. She concentrated on studying music and playing in several samba groups. Soon, she realised that there was not much space for women to develop themselves as artists. This situation motivated Maira to create her own 100% online pandeiro course for women. It is a 30-hour course that covers the story of samba, lessons, teacher consultation, and a certification of completion.

Her next step with her samba course is to reach other countries and territories. Maira wants to show women from all over the world that they can make their dreams of being artists come true and showcase the importance of women in samba.

As for her book, she wants to have an English and French version. Thus, she can inspire more people:

“I also have the dream that more and more children practice table tennis and benefit from it as much as I did.”

Maira encourages black people to go to their roots and to stand up:

She also sends a wake-up call to white people in order to understand and fight their white privilege:

“My message to white people is for them to see beyond themselves, and try to understand that not everything is about them and that if they continue to think and act the way they have always done, things will get much worse, because from the moment they [white people] stop being racists, racism is over, so awareness of whiteness is necessary so that they can deconstruct themselves and end systems of oppression such as racism.”

We thank Maira for accepting our invitation and for sharing critically and honestly her experience and inspiring work with us. We wish her all the best in her future projects and hope to read the story of little Maira in English soon.