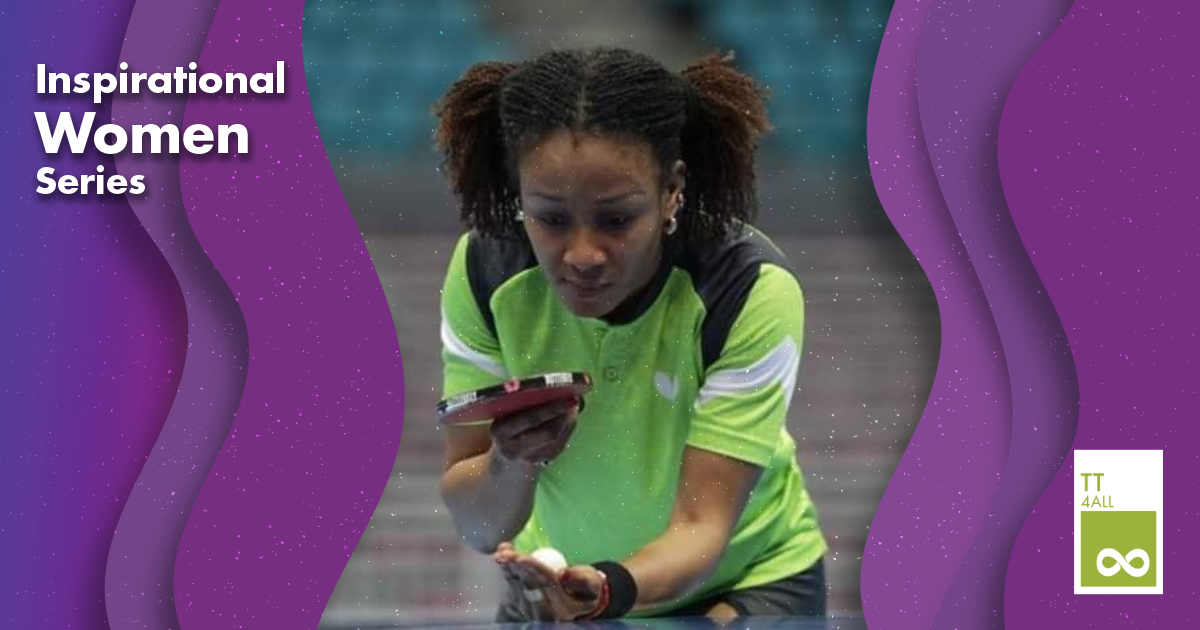 Today is the International Human Rights Day, and we would like to re-activate our Inspirational Women Series and dedicate this article to everybody out there defending and fighting for human rights, telling their stories and standing up for others. Nigerian six times Olympic table tennis player Funke Oshonaike knows how empowering sharing one’s story is – not only for oneself but for others, too.

Having participated in six Olympic Games, already qualified for Tokyo 2020 and counting on a lot of experience – Funke Oshonaike can look back on a sparkling table tennis career. But she is not quite done yet: She wants to earn her place in the ITTF’s ‘seven club‘. In table tennis, only men have managed to play in seven Olympic Games so far. Funke Oshonaike strives to be the first woman to achieve that.

How it all began

Her passion for table tennis was ignited at the tender age of 9:

“I started playing table tennis on bricks, then I moved to anything that looked like tables.”

Following the footsteps of her older brother, she never took her eyes off the ball and started to play in the neighbourhood and in the streets of Lagos, Nigeria. Crowds started to form around her, eager to get a glimpse of the unusual sight of a girl playing table tennis, bursting with talent. Not long until she was discovered and quickly won one school championship after another, always on the rise, including several participations and medals in the All‑African Championships. After some time in Italy, she eventually moved to Germany in 1998, where she is still active in her table tennis club in Hamburg.

Taking matters into her own hand

Throughout her career, Oshonaike has faced many difficulties. Despite her athletic success, the fact that she was a woman seemed to be an obstacle that would return to haunt her. The 11-time African Games medalist recalls being constantly talked down or shamed, simply because she was a woman. After a long journey of building confidence, growing up and learning to love herself, she now not only stands up for herself when somebody tries to discriminate her for being female but also does everything to spread this message to young girls and women.

In 2016, the Funke Oshonaike Foundation came to life. The idea came to Oshonaike because every time she would go back to Nigeria, talented table tennis players would ask her for equipment. Seeing herself in the eyes of those young players in need, she worked on building a programme that could not only provide young local players with the necessary, new equipment but at the same time also reuse table tennis equipment from clubs in Hamburg that was no longer used. In 2017, her Foundation held its first tournament and clinic.

“Nothing gives me more joy than seeing all the young, poor players happy with the little I gave them.”

Oshonaike is convinced that the table tennis community is trying its best in terms of fairness and equality, yet there is a long way to go. Especially from her experience growing up and playing in Africa, she criticises the lack of female staff for female players. The focus is put on male talents, by male trainers – female players are often disregarded or deliberately run down. Oshonaike calls for more women in leading positions in the table tennis world:

“Nobody can understand young female athletes more than female administrators and female coaches.”

When organising workshops or holding events through her Foundation, Oshonaike ensures to make time to talk to young girls and offer them a piece of advice. They often still lack confidence due to their age. But she wants them to learn that they are just as valuable and important as their male counterparts. Nobody stands above the other, we are all equal members of society.

Strength born out of dark times

Unfortunately, abuse is often still a taboo in sports. When Funke Oshonaike openly shared her story, she started to break down barriers in the table tennis community: She has experienced emotional, physical and sexual abuse in her past relationships.

She does not allow all the low points of her life to bring her down. Self-pity or pessimism is not an option:

Despite all the pain and obstacles in her way, she never gave up table tennis.

Looking back on what she went through motivates her. Surrounding herself with people that elevate and encourage her, cutting out negativity and most importantly, not letting anybody talk or drag her down – these are the practices that brought Oshonaike to where she is today. Being a woman in this world is a strength, not a weakness.

Funke’s advice for women and girls

“Always carry yourself in high esteem. You can be who you want to be with determination, dedication and discipline. Never allow anybody to pull you down. The world is like a rollercoaster, never give up on your dream. Stay away from negative people and anything or anyone that’s telling you that you can’t make it because you’re a woman. Remember, you’re you and you’re unique.”

We, the ITTF Foundation, would like to take the opportunity to thank Funke Oshonaike for sharing her heartbreaking, yet inspirational story with us!